One of my New Years resolutions is to create a custom design for this blog. One slight problem is that I’m more of a developer than a designer. Give me an image and I can slice / dice, write the css and develop the theme quite easily. Here’s the killer, blank space frightens me.

To start my steep template designer learning curve I went on the hunt for tutorials. Luckily a lot of the feeds I read have a lot of tutorials to stat me off. Here’s some links to photoshop wordpress theme tutorials.

Here’s a few photoshop design tutorials from six revisions. This first one is a clean blog design with a large header and main content area with sidebar for sponsors.

This design is made appealing by the use of the coordinated large black header and footer. It delivers a minimalist theme which could be used on a variety of blogs.

This is my personal favourite of the three and I’m sure it will come in useful for the redesign. It uses the 960 grid system to design a minimalist blog layout. 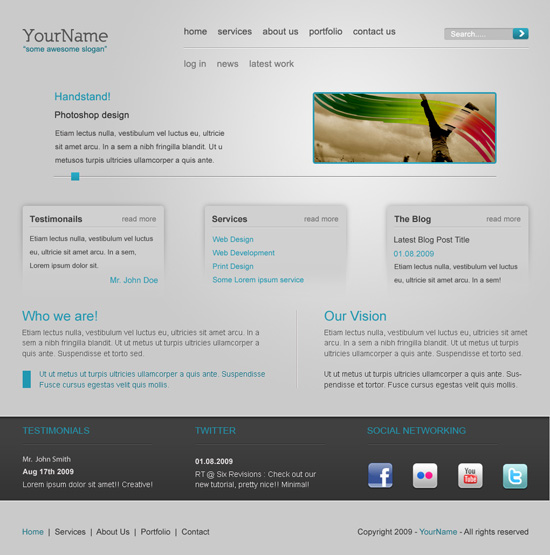 Ultimate design roundup from hongkiat – A comprehensive list of tutorials for wed design. Even though they’re not specific for wordpress they provide good inspiration to generate templates in photoshop.

Photoshop to wordpress from scratch – A tutorial detailing the full process of creating a blog design in photoshop then implementing it in wordpress. 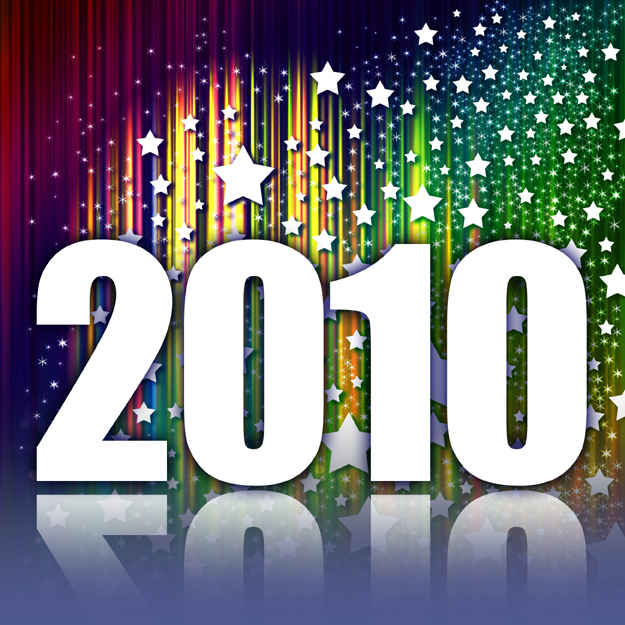 January is upon us again. Finally got rid of the turkey now is the time to look forward and set some goals to see what great changes we can make happen this Year. Here are some of my online New Years Resolutions.

Write at least two posts a week. The topics will be on all sorts of development such as php, jquery, iphone. Also I’ll occasionally drift into SEO and general website need to knows.

Design a new theme for this blog. My smashing magazine book should come in very handy for that task. This is going to be quite a learning curve for me as lets say my artisitic skills are somewhat dormant.

Currently there are no people signed up to the feed therefore the goal by the end of the Year is to get 50 people signed up. I suppose I could get my family to sign up to accomplish that one. Only joking, it could get quite embarrassing to tell them to behave in the comments section.

Develop an app and get it published / approved in the app store. 2009 was the Year I got into the macworld. I got a mac, iphone with the idea that I would develop for the iphone. This started slowly so 2010 is the Year to get the app developed and published. Anyone fancy yet another todo app.

Increase revenue by 20%. This isn’t going to pay for an island in the Carribean but it’s a target and will give me something to strive for. The eagle eyed viewers will notice there’s no adsense on this blog but I do use it on one of my other sites. Any tools, tips, tricks I find along the way I’ll blog about to share my new found knowledge and help everyone get some pennies for server costs.

Contribute to the online conversation. I’ve been lurking for far too long. I’ve got about fifty subscriptions in my Google reader and regularly read great posts that I think I could add to the conversation by leaving a comment. The usual thought is great post, I must leave a comment. OK I’ll do it later when I have a bit more time. As you probably guessed that rarely happens.

This brings me onto another personal project where I generate a page on the blog which will show all my flickr, tweets etc etc. I saw this done on someones blog and it was a nice way to bring everything together. I can’t remember the site but will try and find the link to thank for the inspiration.

Here’s my commitment noted in history. My progress will be documented on here. Hope you all have a very productive 2010.

PhpBB is one of the most popular forum programmes on the net. Of-course with the added benefit that it’s free (Open source is cool). As usual the problem with popular, great online systems is they attract the most evil of online folk known as spammers. They do have other names but this is a family site so we’ll leave those until after the watershed.

These spammers come in a number of different flavours. They’re sole purpose is to tell your beautiful forum lots of off-topic info such as where to buy little blue pills and where to see the latest home-video of some celebrity who forgot to put their clothes on and who sounds out of breath.

Anyway we don’t have to suffer in silence.

There are a number of methods that can be used to cut down the number of spam registrations on phpbb3. The most popular that is used is the captcha

The captcha once upon a time used to be pretty effective in stopping the spammers. Now it seems that it doesn’t matter how difficult the captcha is to read, automated systems can easily signup. Therefore you end up alienating real users who want to sign-up and make it near impossible for visually impaired users.

One improvement on the visual captcha is the audio version. Once again this can cause problems for disabled users.

On phpbb2 there used to be a very good mod which basically asked the users questions. If the user answered correctly then they could signup. The useful feature of this simple mod was that it could be setup with numerous questions and answers. This meant that a different question would be displayed when the forum signup page was loaded. Only problem with this great mod was that on upgrading to phpbb3 it wasn’t there. There is another similar anti-bot mod but this one only has one question with two possible answers. This appears very successful at the moment but the question will have be changed regularly so that the answer doesn’t become mainstream and easily hacked again.

This helps reduce the number of auto bot based registrations where a computer program is fed lots of forum addresses and off it goes to create havoc.

The zero poster is the laziest of the bunch. More often than not they are created via bots. They signup then fill in their website details and other spam information then leave the account to fester and hope that google thinks their profile link is adding some spectacular service to the internet that their profile should be indexed. Mmmm I’m afraid not.

Next in the food chain …. The one poster

Evolution then gives us the one poster these can also be bots or sometimes the lazy human spammer. These creatures turn-up, register (include web address in profile and signature). They then make one post saying anything from a non-value adding comment such as “great site” or “nice weather” or some other inane words to the other end of the spectrum saying about their great site and once again put in a link.

These blighters can be controlled via a number of methods requiring varying forms of effort. Obviously they can be manually warned / deleted by moderators or forum owners. As in the zero poster they can be pruned using the built in prune users function in the phpbb3 admin panel.

One method is to modify the forum so that their website link, signature is only shown after they’ve posted an arbitrary amount. Obviously this amount depends on how busy your forum is. You need to keep a balance between keeping the undesirables out and keeping the regulars happy.

One route that can help deter the flytipping users is to use a nofollow tag. This doesn’t stop them from posting rubbish links to your site but it helps in a couple of ways. Firstly it means none of your google rank juice is given to these sites. Secondly a lot of people who either buy links or acquire links for these people will not go near a site which has nofollow.

In php I’ve put a couple of nofollow’s into the code. The first is in the forum post. I got a cool one-liner from this forum and tweaked it not to alienate the loyal band of users.

In viewtopic.php find the following lines

Then copy and paste the following.

This then got me thinking about the register page. I've also nofollowed their sites unless they post more than a certain amount of posts. This was slightly more work to achieve the same effect but only involves a couple of file edits.

I added a field to set nofollow or not.

the following line was added

Then edit memberlist_body.html in the template section of the style your using. Find

Another way to stop search engines from indexing profile pages is to use the robots.txt file. This site gave some phpbb specific robots.txt edits. This is quicker than than the file edits above. It just depends on whther you want to exclude all or tweak it so that only those lower down the food chain get excluded.

The fight goes on

Looking after a forum can be hard work sometimes. By adding modifications makes it slightly easier. This post gives a brief look at some tweaks it doesn't go into the why, that will come in later posts.

I’ve been a big fan of igoogle for a couple of Years. It’s great to have instant access to so much information without the need to visit numerous pages. I wanted to replicate a much scaled-down version for one of my sites.

I found a great tutorial to create my own igoogle style dashboard. It has quite a lot of features such as drag and drop, edit, delete, expand / collapse. Here’s a preview of the dashboard

After going through the tutorial the dashboard was tailored for the site. The main purpose of the dashboard was to display images from various sources. For one of the widgets I used google ajax search functionality. This was straightforward to plugin with just some slight tweaks to the stylesheet for some of the colours.

In another widget I put in a search facility to drag images from flickr using the json feed. This was accomplished using a jquery flickr plugin. The code was tweaked for search instead of reading from someone’s stream and added the pagination so that more results could be scrolled through.

On top of this I then added litebox so that when one of the flickr photos were clicked a lightbox opened showing a larger version of the photo was shown and the options to scroll through the rest of the result set using the left and right hand side of the image.

This part was slightly tricky to get the litebox to activate on the flickr feed. In the end it was simply knowing that the jquery call to the dashboard was made first then to the jquery flickr plugin. This I found out after some reading of a jquery book I bought (Learning JQuery 1.3

) and a lot of trial and error.
Within the jquery plugin call a call was put in to activate the litebox plugin. The current version of the jquery dashboard can be found on the abracadabra tattoo website were it’s purpose is to give tattoo design inspiration so prospective customers can find plenty of tattoo ideas from the comfort of their screen.

As you can see the possibilities are endless with jquery and there are very good plugins available. All it needs is some tweaking to bring the elements together. As for the dashboard example it’s far from finished. It needs some more feeds and possibly expanding using cookies or a database so that user preferences can be stored for future use.